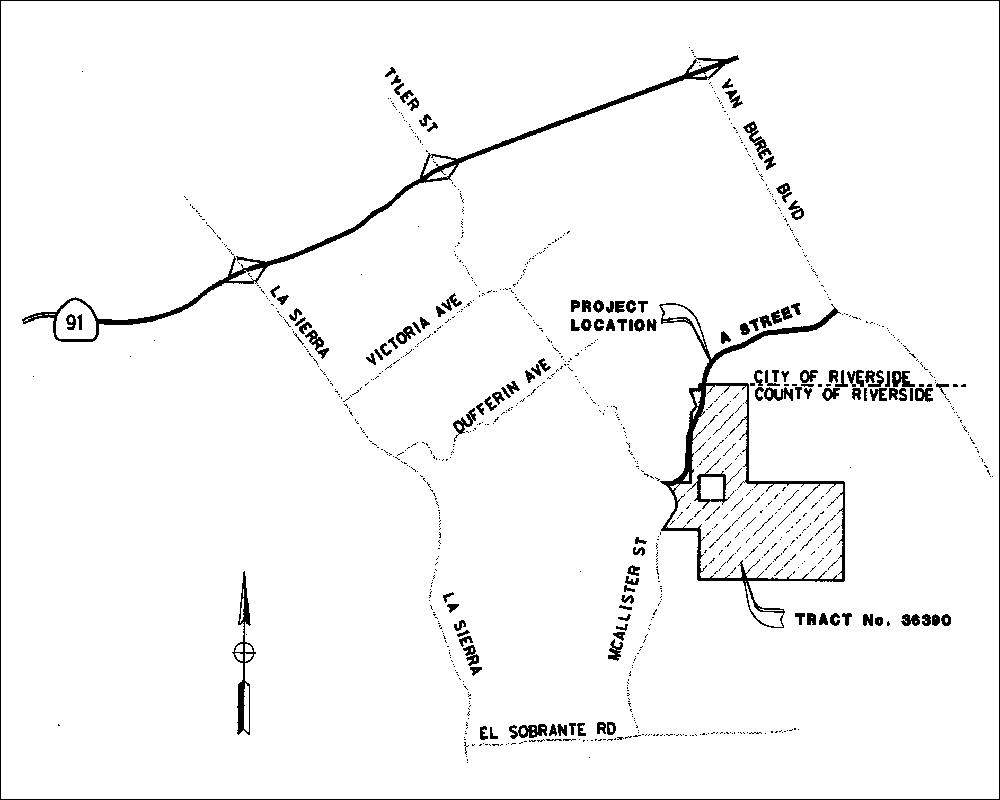 At the public hearing this morning, the Board voted 4-0 to approve the resolution.

According to Transportation Director Perez, the road is expected to cost “in the neighborhood of about $8 million”, the cost of which will be “borne by private development”.

On January 13, 2015, the Riverside County Board of Supervisors will hold a “Public Hearing on Adoption of Resolution No. 2015-002, Authorization to Adopt a Resolution of Necessity for the Street A Improvement Project”. According to the agenda, the meeting begins at 9:00 AM. The hearing is agenda item 9-2.

If you aren’t familiar with the Street A / A Street project, here is some background from the Submittal to the Board of Supervisors (you can also review the numerous posts we have written about the Dufferin closure and A Street project here: dufferin-closure):

In 2006, the County approved Tract 30153 (McAllister Hills), which would have constructed a golf course residential community development. The County required this tract to construct a new road between McAllister Street and Van Buren Boulevard, referred to as Street A, which would serve traffic from the development and provide an alternate access route for residents of Victoria Grove, The Orchards, and other communities in the area north of El Sobrante and east of La Sierra Avenue.

The road design was nearly complete and right-of-way was about to commence in 2008 when work ceased on the developer’s project, which went into foreclosure due to the economic downturn.

Since that time, the community desires to see Street A move forward ahead of development due to the closure of the extension of McAllister north into the City of Riverside, which was done by the City in 2009.

The Project is a critical circulation and emergency access link for the communities of The Orchard, Victoria Grove and other developments located east of La Sierra Avenue, and north of El Sobrante.

What is a resolution of necessity? I’ll let a lawyer answer that question. From http://www.eminentdomainlaw.net/handbook2_6.php:

A “resolution of necessity” is the government agency’s formal decision to acquire property by eminent domain. It must be adopted before the condemning agency can commence an eminent domain action in court.

Why is a resolution of necessity required for this project? From the Submittal:

The Economic Development Agency/Facilities Management (EDA/FM) has presented written offers to the property owners as required by Government Code Section 7267.2. The amount of the offers is consistent with current property values in the Woodcrest area and is based upon a fair market value appraisal report.

The Project consists of six property owners; two of which have settled. However, settlement has not been reached with the remaining four property owners, although negotiations are still in process for the necessary right-of-way

How would this be paid for? From the Submittal:

All costs associated with the acquisition of these properties are fully funded by Developer Contributions in the Transportation Department’s budget for FY 2014/15. No net county costs will be incurred as a result of this transaction.

This website is not my day job. It is a labor of love. If this website is helpful, please show your appreciation by leaving a comment, sharing a post, clicking an interesting ad or liking/following one of my social media accounts. Thank you, Kris aka Ole.