The U.S. Department of Housing and Urban Development announced Tuesday that it has awarded almost $2 billion to over 7,000 homeless assistance organizations throughout the Country.

The following tables show the organizations in Riverside and San Bernardino (source: HUD) 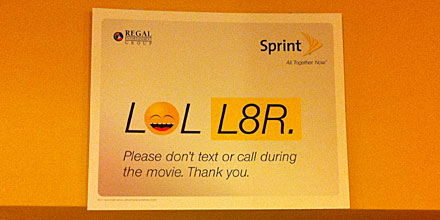 Cell phone use during a movie bugs me, whether it is the beacon of light emanating from a cell phone screen in the dark movie theater or the sound of someone carrying on a conversation.

Although I know that I am not the only who feels this way, The Hollywood Reporter revealed some interesting findings in a survey of 750 social network users ranging in age from 13 to 49 conducted by market research firm Penn Schoen Berland:

Fifty-five percent of moviegoers have texted during a movie. And film moguls, take note: The poll found that a majority of 18-to-34-year-olds believe using social media while watching a movie in a theater would add to their experience, and nearly half would be interested in going to theaters that allowed texting and web surfing. “Millennials want their public moviegoing experience to replicate their own private media experiences,” says Penn.

Apparently, the “please turn off your cell phones” announcements aren’t working too well.

I have never seen a movie theater employee ask someone to stop using a cell phone during a movie, so I sometimes end up doing it myself.

So, if someone asks you to stop using your cell phone during a movie at Corona Crossings, Dos Lagos or the Tyler Galleria, it just might be me.

I drove by Main / University in downtown Riverside this morning to see the Occupy Riverside protest firsthand.

There seemed to be more signs than people.

Yesterday, I went to buy a new cell phone at the AT&T Wireless store in Corona Crossings. When it came time to pay, I realized that I had left my wallet at home. This was supposed to be a quick stop before taking my two oldest kids out for dinner. As I was putting my old cell phone back together and explaining to my kids that dinner would have to wait, the man next to me at the counter offered to let me (a complete stranger) borrow $200 so I could pay my bill and feed my hungry kids. I thanked him profusely, but told him that I would go back and get my wallet instead.

Although I didn’t “need” the help, I am thankful that there are people out there who are willing to help a complete stranger.

Thank you to the Good Samaritan I met yesterday.