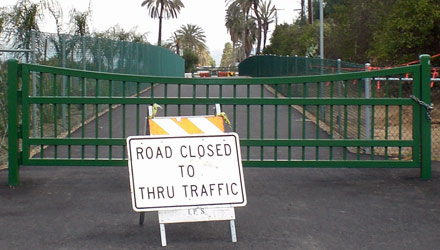 This project will construct permanent improvements, including a street knuckle at the Dufferin Avenue/Stewart Street intersection and a 15-foot wide multi-use asphalt trail connecting Stewart Street with McAlister Parkway.  The trail will be gated at each end; however, still allowing for the free flow of pedestrian and bicycle traffic.  Fire and ambulance units will be able to access the trail by activating electronically controlled gates at each end of the trail using the same transmitter used to preempt the City’s traffic signals.  Construction of the improvements is anticipated to be complete by mid-December 2009. – City Council Memo dated 09/22/09, emphasis added